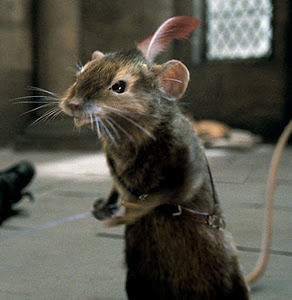 It has been said that dynamite comes in small packages and this statement has been proven time and time again over the centuries. The elf, Galadriel, in Professor Tolkien's epic tale, The Lord of the Rings says of the minuscule Hobbit folk, "Even the smallest person can change the course of the future." Frodo, Sam, Merry and Pippin who are of very little significance if compared to great beings like Elrond, Galadriel and Treebeard whom they share a world with prove to be made of such stuff as to play pivotal roles in the freeing of a world from the clutches of an evil force of a staggering magnitude. The ring has the power to twist the nature of people and it seems that the more power a person wields the more susceptible they are to its evil influence as Galadriel says, "Instead of a dark lord, you would have a queen, beautiful and terrible. All will love her and despair." Galadriel is an ancient and powerful elf and the ring would twist her nature to the point that she would use her power to become a tyrant. Frodo, having very little power for the ring to work with, is thus small enough to be the ring bearer. He has the heart of a lion though because with the help of his gardener and steadfast friend, Sam, he ventures into the very heart of the Enemy's land to destroy the ring. In a paradoxical deviation from the norm the Hobbits' weakness is their strength. As I write this I am browsing through a master's thesis titled Representations of Satan in the Narnia Chronicles by C. S. Lewis written by Caroline Goodwin and I'm in awe of the the faith of the valiant mouse, Reepicheep, who sails to the end of the world in search of Aslan's country. Reepicheep is another example of how the smallest of us can make the biggest difference. I went to go and see Prince Caspian yesterday and now as I'm browsing Ms Goodwin's thesis I realise the influence The Chronicles of Narnia have had over me as a person. When I started this blog I said that one realises that this series of books is gunpowder on re-reading it as and adult (a state of existence many doubt I've reached) – by that view I firmly stand. This is a series written for children and yet it serves to inspire love, faith and kindness in many adults. Like a Hobbit its strength lies in the fact that it is easy to read and it takes the core Christian values and presents them in a simple allegory. Many churches water down Christianity to suit the masses but Lewis simplifies it so that children (and adults) can be inspired to seek out the real thing.
Posted by Charles Siboto at 10:58