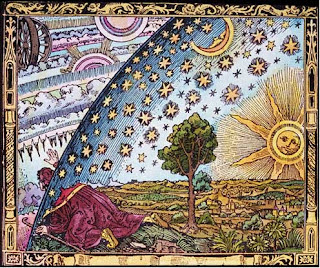 I propose to write a short piece about magic and the nature of magic both in our world and in worlds beyond our own of which we sometimes catch a glimpse in the work of various authors who have written accounts of their visits to those wonderful countries. Before venturing any further I need to define what magic is and how I plan to make use of the term. If you were to refer to Peter Kreeft he might tell you that magic and technology are similar in their vision of progress. Technology means instant everything and magic (in a Faustian context) meant turning lead into gold in an effort to satiate man’s greed. This, though, is not the sort magic that I wish to speak of. The one thing that one has to understand about magic from the onset is that like gravity you can use it to work for you or against you. Like all good things evil can pervert it and use it in a mocking fashion but that is about all. J.R.R Tolkien noted this fact; when magic is wielded for the benefit of others it can be used to, in the term that Tolkien uses, sub-create. In a letter Tolkien refers to in On Fairy Stories he wrote:

“Although now long estranged,
Man is not wholly lost nor wholly changed.
Dis-graced he may be, yet is not de-throned,
and keeps the rags of lordship once he owned:
Man, Sub-creator, the refracted Light
through whom is splintered from a single White
to many hues, and endlessly combined
in living shapes that move from mind to mind.
Though all the crannies of the world we filled
with Elves and Goblins, though we dared to build
Gods and their houses out of dark and light,
And sowed the seed of dragons – ‘twas our right
(used or misused). That right has not decayed:
we make still by the law in which we’re made.”

Man is like Hagrid, the half-giant in the Harry Potter books, who had his wand broken but continues to wield it in secret when no one is looking. Man wields the magic to sub-create art that is so beautiful that it tugs at the heart strings of his peers. This sort of magic is simply as Peter Kreeft puts it, "the magic worked by our souls". Our ability to sub-create stems from a certain magic "that is worked upon our souls" though. Every single beautiful thing that man creates is inspired by a power he does not understand though that power knows him through and through. I think of artists as wizards who specialize in different fields, like the wizards in Terry Goodkind’s Sword of Truth series. Some artists are prophets, some are healers and others are war wizards. I watched Final Fantasy VII: Advent Children yesterday and in it I found magic that did marvelous work on my soul. All the epic stories whether they are Eastern, Western or African tell the same story: they all tell of the war between good and evil. That is the drama of our lives. With the little pixie dust that is given to us we sub-create great art to remind us of the ongoing war between good and evil. The best magic, I think, is the sort of magic that goes unnoticed. In one of the Sword of Truth books Zedd (if my memory serves me well) explains the role of wizards in a war to Richard. Wizards on both sides of the conflict always seem as if they have no effect because their magic reaches an equilibrium, the one side works magic to counter the other's magic and then tries to slip a spell past their defences until an equilibrium is reached and the men at arms can fight it out. But if the one side fails to maintain the balance one witnesses the destruction that magic can cause in a battle. Real magic is something like this, it works for people without them ever noticing its presence but if if it were to stop working the repercussions would be felt immediately. In The Matrix, the Oracle notes that we never notice the programmes that do their job, but you always hear of those that are not doing what they are supposed to.

There is also the magic that can be found in nature; the magic of trees, lightning, the ocean, the roar of a lion. This magic is so awe-inspiring that pagan societies fell down on their knees before the majesty of nature. With the invention of telescopes and spacecraft nature has become even more majestic. Even when you try to reduce the universe down to science it never ceases to astound. Sir Isaac Newton said:

"I do not know what I may appear
to the world; but to myself I
seem to have been only like a
boy playing on the sea-shore,
and diverting myself in now and
then finding a smoother pebble or
a prettier shell than ordinary,
whilst the great ocean of truth
lay all undiscovered before me."

The universe, multiverse or whatever you wish to call it is lined with mysterious magic that we sometimes capture in the beauty of art and thus I believe that artists are prophets of something so huge and beautiful that it would blind us to look at.
Posted by Charles Siboto at 16:38