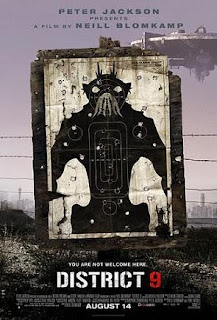 I was watching some show on TV a few nights ago and they were all hyped up about this movie when I remembered NAG saying something about it... and the fact that Peter Jackson was the Producer didn't hurt in persuading me to go and see it either.

All I can say is Wowzers! This movie is the "fokken" shiz hey! Seriously, who would have thought that aliens landing in Johannesburg could make such a cool story? Blomkamp and his team chucked everything into this movie: that Cloverfield-esque shaky cam/security surveillance cam thing that usually irritates the crap out of me in other movies, documentary style commentary and speculation, lots of violence and gore (always a good thing in movies), playing with the whole apartheid/xenophobia thing in South Africa, shady Nigerians (rather stereotypical but good fun all the same and an Afrikaans guy who says "fokken" a lot. I spent this first half of the movie laughing at how South African the movie was, which is really cool. The second half I spent ogling the cool special effects an just enjoying how the MNU soldiers and Nigerian gangsters explode when they're hit by the alien weapons.

I was asking Lady Leigh of the Meadows how it feels to live in a city that you see getting destroyed in movies when I saw the Millennium Bridge being taken out by Death Eaters in the new Potter movie and now I have some idea: it's kind of worrying. I'm being a chop but the Nigerian gangsters scared the crap out of me - they're so freakin' ruthless hey. People who live in New York must be brave because that place always gets trashed in movies.

All-in-all District 9 is hands-down the best South African movie in the history of the universe! Go see it, whether you like sci-fi or not you will love it. I pinky promise.

P.S. Check out Christopher's blog while you're here.
Posted by Charles Siboto at 11:48