NetherRealm Studios has decided to give our favourite DC heroes and villains a stage on which to beat the snot out of each other and it sure does look pretty and is loads of fun to play. Injustice: Gods Among Us is the new kid on the block in the fighting games arena and it holds its own against the big boys like its stablemate, 2011's Mortal Kombat. In fact it’s pretty much Mortal Kombat with new mechanics added to the gameplay. DC has never had its own brawler unless you count Mortal Kombat vs. DC Universe, which you should seeing that it’s still fun to play. Most gamers grew up on fighting games. I remember running to the ‘games shop’ (we never called it an arcade) near my house after school with a pocket full of 50 cent coins with the aim of kicking butt. Most of the fun in fighting games comes from mastering all of the characters’ hellishly difficult moves and stringing a bunch of cool combos together. Looking back I realise that this was actually an achievement on the same level as attaining a PhD. Injustice allows you to spend hours mastering a character like Batman’s moves so you can kick Superman in the head in a showdown.

I’ve yet to meet a fighting game with a storyline that actually makes sense and Injustice doesn’t stray from this time-honoured tradition. The story in Injustice exists solely to give you a rather flimsy reason as to why DC’s roster of characters are all standing around beating the nonsense out of each other. This isn’t a bad thing because you’re really only playing to beat up a bunch of virtual people. The plot explains things like how Batman is able to beat Superman into a Kryptonian pulp. Everything kicks off with in an alternate reality in which the Joker tricks Superman into murdering a pregnant Lois Lane, which results in the destruction of Metropolis because the Joker linked bombs to her heart beat. Superman loses his mind and kills the Joker in fit of super rage. Batman witnesses this and because of his moral inclination cannot stand for it. This results in two sides being established; evil Superman and those who side with him and Batman and his side of good guys. Add an incident that allows travel between alternate universes and you have Injustice: Gods Among Us. It’s all fun.

As I’d mentioned earlier, Injustice looks pretty. The characters are well designed and they look good. The Joker looks especially creepily crazy, which we like. The game levels look amazing and are interactive. Each level is tiered and you can beat your enemies through walls and such to launch them into the next tier in a spectacular fashion. The fighting stages include classic locations like the Batcave, Superman’s Fortress of Solitude and the Justice League’s Watchtower. You get to battle it out on many of the places in the DC universe where you’ve ever wanted to see a showdown between DC’s finest or worst – depending on your inclination. 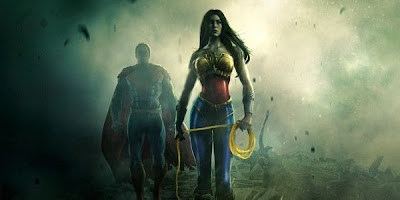 The gameplay in Injustice is all the things you’re used to in fighting games with cool twists added. Every match consists of only one round and each player has two health bars and the match ends when both those bars run out. The four-button control scheme consists of light, medium and heavy attacks. The fourth button activates an ability unique to each character. This is one of the features in the game that levels the battlefield for characters like Batman and Green Arrow against behemoths like Superman and Doomsday. Characters are divided into ‘power characters’ and ‘gadget characters’. The former use their brute strength and super abilities to bash your skull in and the latter rely on weapons and other external mechanisms to defeat their opponents. Speaking of external mechanisms, each level is littered with interactive elements each character can use differently. Superman can throw a car at his enemies whereas Batman can use that same car to launch himself into the air and pull off a combo. Players also have super meters that you can fill by pulling off cool combos against enemies or by getting clobbered. You can use the meter to either to perform special attacks or to compete in wager battles by means of the Clash system. When you go into wager mode a cutscene pops up to interrupt the current play and each player has to put a portion of their meter energy on the line. The player whose wager is the most wins the clash. The clash can only be activated when you’re down to your second health bar. This adds a great strategic element to the game in addition to the interactive elements littered around the levels. I like this system of gameplay as it makes every fight more exciting. The game isn’t difficult to get a hang of but mastering it is a different matter – that requires some effort. The game doesn’t have much of a tutorial system so players have to master character moves during actual combat. The game does include different game modes in addition to the Story Mode and sparse Training Mode. These are Battle Mode, Versus Mode and S.T.A.R. Labs (missions that consist of Batman using S.T.A.R. Labs facilities to complete objectives). 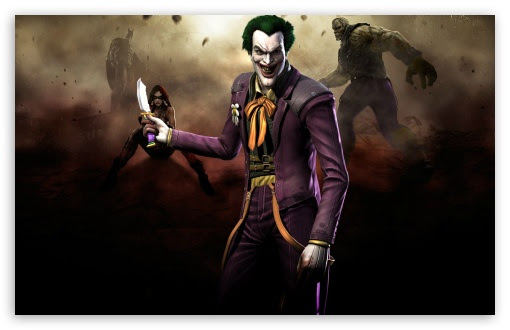 Online multiplayer options consist of King of the Hill and Survivor modes. In the latter mode players spectate matches whilst awaiting their turn. This mode supports up to eight players. Survivor Mode consists of players carrying over whatever health they had left from previous battles throughout as many fights as possible. Playing through all of Injustice’s modes unlocks artwork, new costumes and music.

Pick up Injustice: Gods Among Us for approximately R600.00 at your nearest games retailer. Injustice is nowhere near being a great fighting game but it’s fun to play and because it’s not as technical as Tekken or Street Fighter anyone can pick it up and have a great time fighting against their favourite DC characters. The roster is on the skimpy side but DLC will probably fix that soon enough.

Pick up Injustice and button mash your way through the ranks.
Posted by Charles Siboto at 16:50