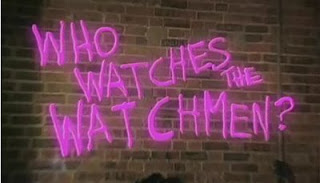 “… the secret of the Great Stories is that they
have no secrets. The Great Stories are the ones you have heard and want to hear again. The ones you can enter anywhere and inhabit comfortably. They don’t deceive you with thrills and trick endings. They don’t surprise you with the unforeseen. They are as familiar as the house you live in. Or the smell of your lover’s skin. You know how they end, yet you listen as though you don’t… In the Great stories you know who lives, who dies, who finds love, who doesn’t. And yet you want to know again”- Arundhati Roi, The God of Small Things.

I went to go and see Watchmen last weekend. I love the graphic novel and I was waiting for the movie to come out for some months now. I was actually expecting it to come out in July so the March release caught me by surprise.

The accuracy with which most of the graphic novel was captured and translated onto the silver screen is remarkable. I browsed through the graphic novel the day before going to see the movie to refresh the story in my mind and I was pleasantly surprised to see that the movie used the panels in the graphic novel as scenes and they barely changed the dialogue – which just goes to show how good Watchmen is as a graphic novel.

After seeing Watchmen (which I'm going to go and see again on Wednesday) I started thinking about the movies I like. I rarely go to the movies to see a movie whose story I don't know. All the movies I watch are based on books I've read or comic books whose plots I know. I like familiar stories, they have to be comfortable enough for me to jump right into them and know what's happening. I'm the sort of person who reads the same books over and over again because I like the way they are written, I've fallen deeply in love with the characters (and plan to name my children after them) and because the stories make me weep. I'm currently reading Terry Goodkind's Confessor and I had to hold back my tears on the bus this morning because I was so impressed by the strength of Richard Rahl's spirit. When I was reading Stephen King's The Waste Lands I came across one of the most beautiful sentences I have ever read (which I don't recall now) and I stopped and reread it for fifteen minutes.

All the lovers of stories, whether they are about wizards and dragons or superheroes, go to the movies to see them in a new light without wanting the essence of them to change.

Who watches the watchmen? The fans of books, comics and video games. We are the watchers of movies based on our favourite stories. We go see a movie based on the Watchmen graphic novel to see if they can capture that epic feeling we experienced when we were reading it at 3 in the morning. Once in a while something like the Watchmen movie comes along and makes us happy to be those shadowy figures behind the scenes that keep a protective eye over the watchmen as they keep the streets safe.
Posted by Charles Siboto at 15:23

Where are you buddy?

Completely inane, but anyway, you've put me in a mind to go browse a certain book shop Charlie-san, perhaps for once in my life I will begin to build a library.