Bats on the Brian 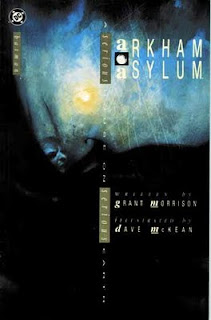 "You're in the real world now and the lunatics have taken over the Asylum."
- The Joker, Arkham Asylum, A Serious House on Serious Earth

Okay, I officially have Bats on the brain; the guy is taking over my life and I'm losing the little that remains of my sanity - assuming I was sane to begin with. I've probably played the Arkham Asylum video game demo hundreds of times and I'm rather sad that I won't be able to afford the full version when it comes out on PC later this month. I'll make a plan though, something like stealing my neighbour's cat, Mr Ginger, and selling him. The game is getting rave reviews on consoles and people are even comparing it to BioShock. I just love the Detective Mode and the silent take downs, there's nothing more satisfying than swinging from gargoyle to gargoyle and swooping down and taking out an enemy and then disappearing before his friends see you. You then sit and watch as the villains in the room get nervous wondering who's next and jumping at their own shadows.

I've also just finished reading the graphic novel, Arkham Asylum by Grant Morrison and Dave McKean, which is surprisingly good - I'd go as far as to say that it's even better than The Killing Joke by Alan Moore and Brian Bolland. I just love how dark it is and how it messes with your mind. If you're into psychology you'll notice some of Carl Jung's archetypes in it and another cool aspect is how The Joker raises the question in the reader's mind: which is the real loony bin, the asylum or the real world? Amadeus Arkham converted his ancestral home into an asylum for the criminally insane because he thought that he could help insane people and thus achieve a triumph of reason over the irrational and other cool stuff like that.

Speaking of The Joker, he's always an interesting character to read about. In Arkham Asylum one of the psychiatrists notes that he cannot be properly defined as insane, she suspects that he is an example of someone with some kind of super-sanity: "A brilliant new modification of human perception. More suited to urban life at the end of the twentieth century." The novel has a very postmodern edge to it and asks whether identity is stable or not. In one scene of the novel one of the asylum's inmates suggests that they take off Bats' mask so they can see who he really is underneath. The Joker intervenes and says that the mask is Bats' real identity. So, you see there's a lot of fun to be had with this novel.

All-in-all, Arkham Asylum is an awesome graphic novel that caters for people interested in exploring the darker corners of the human mind.
Posted by Charles Siboto at 11:49