Attack of the Bloodthirsty Couch 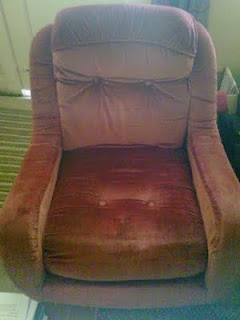 Monsters are real, ghosts are real too. They live inside us, and sometimes, they win. – Stephen King

If you are reading this then I am dead.

This is my chilling account of the strange events that have recently befallen me in my room, the one place I always felt safest... my sanctuary from the harsh world. I feel like Frodo at coming home and seeing that evil had managed to make its way to his very doorstep. Going off into some distant land to fight the forces of evil takes courage, but it is not as terrifying as having the darkness invading your home... not as terrifying as that sickening feeling you get knowing that orcs have been rummaging through your underwear drawer.

Of late the dark forces have been trying to kill me! It all started with the unused couch I salvaged from the storeroom – the falling and then later the spiders. As I type this, ironically sitting on the bloodthirsty couch that is the source of all my misery, I keep glancing at a corner in the ceiling where I am sure the spiders have taken up residence. They are led by a huge, old spider, with venom dripping from his fangs, who I have decided is probably named Aragog. He is a monster bred in the depths of the Amazon jungle that have never been touched by sunlight.

Until that fateful day a few weeks back I never paid much attention to the storeroom in the kitchen, all I knew is that it was dusty and seemed to contain tools that no one in my household had much use for. I am the only male in the house and I have no interest in manual labour, which is why I have spent my whole life pretending to be bookish in front of my parents when all I really do is lock myself in my room reading fairy tales or playing video games. I walked by the storeroom on my way to refill my coffee mug on that fateful day, finding the door slightly ajar and because the sun shone through the one grimy window in the room I could make out the couch in a corner. My room, which I refer to as my Potter Closet, is actually the coatroom of the old house in which my family and some other strange people live and everyone saw it fit to put me in the smallest space available and then to make me pay rent for it. As you can imagine my life is a rather harsh one, but that is neither here nor there, what matters is that I will be killed by the evil couch and its arachnid minions soon. Seduced by the idea of more comfortable seating for the people who feel the need to visit me more often that I would prefer I went into the storeroom to investigate. The couch turned out to be an ugly purplish colour and small enough to fit in my Potter Closet. It was perfect! To hell with my guests, I am the only one who will sit in this couch I thought, they can sit on the floor while I pretend to be Morpheus and offer them red jelly beans or blue jelly beans.

With great effort I dragged the couch to my room and immediately used it as my throne and that is where the trouble began. I would be getting out of bed and I would fall and land in an awkward position that the human body is simply not designed to assume. On one occasion I crashed headfirst into my bookcase and almost broke my neck. What really scared me was the fact that every time I fell (which was quite often) I would almost break my neck and it would always be the couch that prevented me from doing so. It was then that I began to see it for what it was... an agent of the Prim – that chaotic soup that conjures all sorts of monsters to create disorder in this world. Oh, Discordia! I was not surprised when the spiders started appearing all over the room. I would wake up in the morning with the evil beasties crawling all over my face or I would be watching movies, sitting on the bloodthirsty couch, and they would shamelessly crawl over me and I bet you they derived sick pleasure from the way I would run around the room screaming like a little girl for a few minutes trying to get them off me. They are just torturing me for the time being, I just know it, and soon a time will come when they decide to strike... I can feel them staring at me from their hole in the ceiling and I hear the menacing creak on the couch every time I shift my weight on it.

The time is coming that one morning (or evening, the time of day really has nothing to do with it) that my parents will find my dead and cold body sprawled on this couch, I just know it. This is why I am telling you my sad tale, dear reader, so that you may remember me when you walk by a dusty storeroom with the door slightly ajar and stay away.

P.S. My mother has told me to stop whining, buy some Doom and to move the couch a bit further back so that I would stop tripping over it.

P.P.S. Stay tuned for my return from the dead and my fight against the zombie spiders armed only with a can of Doom and a lighter.
Posted by Charles Siboto at 15:07