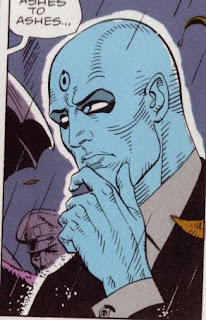 Dear reader of a mad writer,

I'm told that there is a man who appeared on Oprah quite a while back because he is blue and not very happy about it. I've not seen this man and I'm not going to bother Googling him because although my little post was inspired by what I heard about him it has nothing to do with him directly. He must have very good reasons for not enjoying being blue and that is his business.

If I were to turn blue, on the other hand, by painless means I hope, I would totally rock it! The very first thing I would do is buy myself an Armani suit (I'll sell my sister or something) and dress like Dr Manhattan (in the scenes in which he is dressed that is). I'd even go as far as tattooing the hydrogen symbol he has onto my forehead. The most important thing my being blue will do for me is make me a circus star. Some people might find it degrading to be paraded like some kind of freak but I would approach my role in as dignified a manner as possible. Everyone who has a sense of wonder loves the circus and I would be proud of touring with a circus because I'm blue - which will be the only talent I have because I can't juggle or anything awesome like that.

For the reader who has not figured this out yet, I'm a bit of a nerd so I'd be a big hit at comic, sci-fi or game conventions. I could go to these events 'dressed' as Dr Manhattan, a very tall smurf or a Na'vi. The possibilities, although not endless, are exotic to say the least.

I'm the sort of person who likes to be different from others so being blue would allow me to escape all the stereotypes I encounter as a black person and people would be forced to come up with new stereotypes especially for me. I can imagine it, a few stupid dudes just hanging about and one says: "You know, I really hate that blue guy! He is just such a cold bastard." Stupid things like that would make my day I tell you.

What would be the most exciting though is being blue and racist! I'll run around telling people that they are inferior to me and that I am special because there is only one (two if you count the Oprah dude I guess) of my kind. That would probably result in my butt being kicked though, which is no fun I've heard from people who've had it happen to them.

When all is said and done, being blue is awesome if you have the right outlook :D

Peace.
Posted by Charles Siboto at 17:25

Oh. My. Gosh. I absolutely LOVE your blog. haha If I were blue, I'd stop my acting/modeling career (for the modeling thing no duh), and I would join the circus. Only, I would continue my trapeze career (yes, I did trapeze :P). Come check out my blog sometime.
xoxo,
S.O.

Thank you so very much Sunshine (can I call you that?).

I have been away for a while but I have many quirky posts in the works. I hope you like them.

P.S. The basterd with their ads will be shot!!!