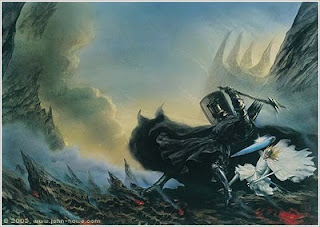 Thus he [Fingolfin] came alone to Angband’s gates, and he sounded his horn, and smote once more upon the brazen doors, and challenged Morgoth to come forth to single combat. And Morgoth came.
– J.R.R. Tolkien, The Silmarillion

Great masters of old,
You'd be amazed by twenty-first century machinery
'though you invented time travel
That modern science has yet to match
I find myself spirited away by words
That are ages old
- Charles Siboto, A Life Lived

The critics say that epics have died out
With Agamemnon and the goat-nursed gods,
I’ll not believe it.
- Elizabeth Barret Browning, Aurora Leigh

I must warn you from the outset that there be dragons here and an assortment of other beasties hell-bent on devouring you and, alas, there are not many heroes to slay these monsters. The world has forgotten the old tales and brave kings of men are no more. All those royal houses have fallen into ruin. But fear not because I have in my possession a machine that will allow us to transcend time and space, so that, my comrade in ancient lore, we may go where we will and forget about my evil couch and its arachnid minions that are pursuing me without relent for the time being.

Winter’s icy tentacles have reached our southern shores and the masses visiting us from all over the world are taking shelter in our country’s soccer stadia to view the world’s largest soccer spectacle. This is all good and well but we will not have too much time to poke fun at them because the remainder of June and the whole of July will be a very busy period for us, what with so many worlds to visit.

Let’s start off by revisiting Elizabeth Kostova’s The Historian - an old friend in a new hardcover jacket. This is a tale that brings Dracula, that old villain, into the one place that bookworms feel safest. Yes, you guessed it, our beloved and dusty libraries. It turns out that, like us, Vlad enjoys collecting books and building an extensive library of human (and not-so-human) thought when he is not busy impaling or ‘necking’ people. So the next time you’re reading on the fourth floor of the library and think you’re alone bear this information in mind. I would recommend a garlic clove or two in your pocket, as unfashionable as it may be.

Make sure you are holding on tight, my dear companion, because our next stop is Middle-earth and Eärendil, most renowned of mariners, has agreed to let us sail with him on his great ship, Vingilot. You must remember that the world has changed after the Fourth Age and only by sailing in one of Cirdan’s ships can one reach the distant past. It’s impossible to grow weary of Professor Tolkien’s Middle-earth and its people throughout the ages. The stories that enthral me the most though are those of the elder days; stories of the Elves and their hopeless war against Morgoth and the stories of the tall Men of Númenor and their downfall. I have managed to get my grubby hands on Professor Tolkien’s The Book of Lost Tales 1 and 2 and The Lays of Beleriand to supplement my copy of The Silmarillion so there is quite a bit more of the elder days to be explored. Also, John Howe’s cover illustration of Fingolfin’s challenge to Morgoth for The Lays of Beleriand is just breathtaking. If ever a movie of The Silmarillion was made this would be the scene I would most look forward to. No other Elven-king of old was more valiant than Fingolfin and reading this scene always brings tears to my eyes.

To keep us entertained as we hop from one world to the next I’ve picked up two books of short stories: Stephen King’s Just After Sunset (which I find is safest read just after sunrise) and Legends II (edited by Robert Silverberg), an anthology of fantasy stories by some of the biggest names in the genre. I’ve already read a few of the stories and some of them are very good. Let it not be said that I take you on long adventures without some form of entertainment when we’re on the ‘road’, as it were. I can see by the look on your face that you’re thinking that I’ve not taken your stomach into account but there’s no need to fret because the Elves from Middle-earth were kind enough to give us some lembas for the journey that lies ahead.

Goodness! How time does fly when one is on a flying ship. We have reached our final destination it seems: Robert Jordan’s world of The Wheel of Time, and this, I am ashamed to admit, is my first visit. As is usual with me, I am very excited to start exploring a new world, so I will linger here and see the sights.

When we get back home another new writer will be awaiting me, a certain Mr Greg Isles who was recommended to me by my dear friend, Lady Leigh of the Meadows. My first expedition into this man’s mind is titled Blood Memory, which I think just sounds wonderfully delicious. Hey, come now, don’t you dare judge me on what I find delicious or don’t! Now go away, I have things to do.

Until next time,
Have a wonderful winter season :)
Posted by Charles Siboto at 18:10