The Month That Was 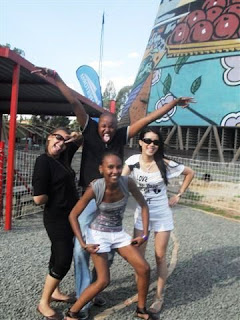 We’ve not spoken for some time, you and I, and I hope you’re well.
November’s already upon us I see... how time does fly. Anyhow, I must say that, as per usual, October was a good month for me. There were many rough patches but hey! Who am I to go around complaining? I’m here and I’m alive, which is a good point to start building happiness from. Let me give you the lowdown of the month that was.

I kicked the month off by attending rAge with t3h Munsh and Sleuth. We had a good time messing with the new tech, talking to the assortment of strange people there and ogling the booth babes. I enjoyed the expo more than I did last year but I did miss the larger anime and tabletop gaming stands they had then. It’s all good though. My PC is also happy because I picked up blue LED fans to pimp it out and now it looks like it would be at home at a drag race in Chatsworth. I’ve come to a point where I love my PC more than most members of my family; it’s prettier, it’s more intelligent and it gives me greater joy. Now, now, you don’t have to say it. I’m materialistic I know, but matter matters.

Meadow Leigh’s sister, Pie, came to visit from the Eastern Cape and I went on a picnic to the beautiful botanical gardens in Emmerentia with the two of them. They also visited me with banana bread over the course of her stay in Jozi. Now, you must know that I have a deep love for banana bread, to the point that I have dreams about it. Yes, I know it’s strange but I really can’t help it. Then my birthday came around and I was a ball of excitement. I’m the sort of person who just loves his birthday even if nothing terribly exciting happens because at least there’s cake. Now, I spent my 23rd birthday marking English assignments, which is not the most exciting thing to be doing on any given day, but there was chocolate cake to cheer me up and books from friends to look forward to reading. People who know me always buy me books for my birthday and I’m happy with that arrangement because I really don’t want much else. My grandmother buys my handkerchiefs though... and I'm still rather unsure what one does with them so I just give her a hug and take them. I did get one gift that deviated from the norm though, a new motherboard from Ed, Leigh and Pie. I mentioned to Ed how much I hate my motherboard at some point and he remembered. After getting the new motherboard the plan was to take the old one and piss on it but I sold it to some guy who thinks he’s a friend of mine instead. I hope it explodes when’s he’s sleeping and scares him. That’s all, just scare him. Not result in his house burning down with him in it or anything as gruesome and painful as that.

I did manage to celebrate turning 23 in style though. My friend Catharine has her birthday two weeks after mine and we decided to do a joint little shindig of a thing, that is to say we went bungee jumping! You heard right. To celebrate turning 23 we went and threw ourselves off of a 100 meter high platform suspended between two cooling towers. It was the craziest experience of my life. Your brain totally shuts down as you throw yourself off that platform and the ground comes rushing up to you. It’s just not normal. Then the rope goes taut and snaps you back up and your brain switches back on and you start screaming f*ck!!! At least that was what I was screaming. It really is just the best thing ever.

To celebrate surviving the jump we went to dinner and then to a strip club – which just happens to be one of the coolest places in the world, den of iniquity though it may be. Lots of naked women in one enclosed space are more fun than they rationally should be.

The next morning I went shopping for books with Meadow Leigh, hangover and all and I picked up Steven Erikson’s Deadhouse Gates for forty bucks! That just made my day.

After all that going down I had to sleep for a week and catch up on my reading, which is what I’ve been doing.

That’s my tale for today bud.