The Days of My Zombie Life 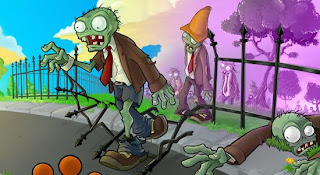 “It was a crazed night of forbidden science that brought Twin Sunflower into existence. Thunder crashed overhead, strange lights flickered, even the very roaring wind seemed to hiss its angry denial. But to no avail. Twin Sunflower was alive, ALIVE!” – Plants vs. Zombies Almanac

Okay, okay... I’m addicted dammit! I admit it and that’s the first step, admitting that I have a problem. I’m addicted to Pop Cap’s simple, yet ingenious, little gem of a game, Plants vs. Zombies. My life is spinning out of control and I’m neither eating, sleeping nor procreating because all my time’s spent in front of my computer screen thinking up clever strategies for my plant troopers to carry out against those dastardly zombies trying to cross the lawn and get into the house whose master’s brain I’m sworn to protect. I don’t even know who this dude is! But I’ll protect him from those zombies till my body gives out and they eat my brain. Why do you ask? Well, because I’m a soldier and soldiers never give up even if we’re facing a zombie apocalypse.

What was I saying again...? Oh, yes, I’m addicted to Plants vs. Zombies and I need help. ...*ten minutes later* Well, clearly help’s not coming so I’m going to pen down some semi-important thoughts about my life that occurred to me in the heat of vegetable warfare before I get fired, dumped, kicked, punched and generally outright ostracised from society for not moving from my computer in weeks. If I’m lucky I’ll just die from starvation, thirst and fatigue before anyone notices that I’ve not been performing my duties as a human person.

So there I was! My defences were crumbling all around me and I was on the verge of being overwhelmed by Dr Zomboss’ forces and when it occurred to me that my so-called real life is a lot like Plants vs. Zombies! Can you believe that!? From such a simple game flow the issues of life. Both the game and my life started out easy enough, plant a few peashooters here and there and things were hunky-dory. It was bliss at first; parents, teachers, bullies and zombies could be kept at bay by simple things such as hiding out in libraries and erecting wall-nuts – which sounds very dirty. But I’m older now and have these pesky things called responsibilities, which are the bane of my life. I hate ‘em, I hate ‘em, I really do! Now the zombies and life’s mundane problems just keep coming at me without any relent and the bigger the wall-nuts I erect the bigger the zombies and problems become. The whole business is throwing my Zen-like balance out of whack!!!

Shakespeare compared life to a stage but that’s because they didn’t have video games or movies then and also because he liked the theatre. Musicians probably went around telling people that life’s like a song. Modern life, I’d say (with as much authority as Shakespeare), is like a video game... a certain video game that involves plants and zombies to be exact. In life, just as in video games (RPGs especially), everyone has ridiculous expectations of you. All they do is run around expecting you to save the world from one ridiculous threat or another, just like certain members of my family and some teachers. Oh, Charles, you really could’ve done better you know. What the hell man?! It’s always the really lame people who are on my case about how I could’ve done better than I did. All the successful people are too busy being awesome to pay attention to me and when they do notice me they’re actually pretty nice and make me feel like I actually can be a bookworm who sits in a large library for a living if I put some blood, guts, sweat and tears into it. I’m not good with pressure at all, it makes me nervous, which in turn makes me feel like puking. People and zombies should give me a break once in a while! You guys can’t just keep bombarding me with weird responsibilities all the time. What’s that nameless dude in the house doing anyway? He should come out here and help me ward off Dr Zomboss’ goons. We’re in this together after all.

Look, I’m not saying that people shouldn’t look out for me and not let me know if I’m veering of the path now and then. All I ask for is a little space, you know, a little room to breathe. I’m a lazy guy who doesn’t like doing things if they seem too difficult – I’ve played video games on easy mode for years and only upgraded to normal last year – and this is not a good thing at all. Constantly wagging your finger in my face is not the best way to get me to do unpleasant things though. That’s the sort of thing that only makes me angry and will result in me throwing chairs at you. Take Plants vs. Zombies as an example; it’s nice and gradual in the manner that it ups its difficulty level. I find myself performing heroic deeds without even noticing that I did. This actually only goes on till the game decides to throw an endless horde of zombies my way and my plant defences crumble to dust and all I've worked to defend goes to hell in a rosy basket.

My point, though, is simply this: I like life, it's a thing of great beauty for the most part but it tends to get overwhelming at times and people and zombies should know when to give a dude a break. That is all. You may return to being a productive citizen. I'm off to deal with those dastardly zombies till I get kicked out of the human race or die from starvation, thirst or fatigue. Whichever comes first.