My Magical Place: Rise of the Guardians 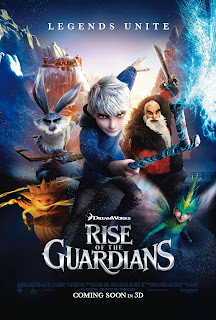 I went to go and see Rise of the Guardians purely because I was bored and seeing Skyfall (2012) a fourth time didn't seem healthy. Also, Santa with those pretty badass tattoos looked pretty cool. Oddly enough most of the children at the cinema were getting tickets for The Twilight Saga: Breaking Dawn Part 2 (2012). Brave new world, I guess.

I’ve read reviews in which Rise of the Guardians is said to be The Avengers (2012) for children and to a large extent I agree – it’s a team-up movie at heart but for the most part it’s the story of how Jack Frost (Chris Pine) becomes a Guardian. The story takes place roughly 200 years after William Joyce’s The Guardians of Childhood series, which I’ve not read and thus can’t comment on.

It’s a movie for children so the plot is quite easy to follow: The Man in the Moon transformed Jack Frost into a winter spirit about 300 years ago, which means he can manipulate ice using a magical staff but it also means that no one can see him as that requires that they believe in him first, which no one does. Being invisible is a lonely affair for Jack and because he’s quite mischievous he doesn’t get on well with the Guardians, who comprise of: North, or Santa Claus (Alec Baldwin) as most of us know him. He is the Guardian of Wonder, has an amusing Russian accent and sports badass tattoos on each forearm, one reading naughty and the other nice. He lives in the North Pole and manufactures wondrous toys with the help of his Yeti and the constant interruption of his elves, who are useless but extremely cute and somewhat reminiscent of the minions in 2010’s Despicable Me. Sandy, the Sandman is the Guardian of Dreams and the coolest of the Guardians. He doesn’t speak but uses his magical sand to make images of what he wants to communicate. This, of course, often results in some amusing misunderstandings. He is my favourite character in the movie and is a joy to see in all of his 3D glory. The only reason to see this movie in three dimensions is Sandy. Tooth, the Tooth Fairy (Isla Fisher) is in charge of collecting children’s memories (stored in their teeth) and preserving them at her palace, with the aid of baby fairies. She’s a lummox. Finally there’s E.Aster Bunnymund, the Easter Bunny (Hugh Jackman) the Guardian of Hope who brings Easter eggs to children the world over. Jack refers to him as a kangaroo because of his Australian accent.


All in the world is not well though, as another spirit, the Bogeyman, also known as the Nightmare King (Jude Law) is hell-bent on destroying everything the Guardians hold dear in order to have all the children believe in him and his nightmares. The Man in the Moon sends the Guardians a message to recruit Jack as one of them and from there a whirlwind adventure ensues that’s magical, amusing and gorgeous in 3D. Rise of the Guardians is fun and embodies the festive spirit without having to try too hard.

Children will love this movie and adults will appreciate its sentiments. Rise of the Guardians made me grin like a kid. It’s not the best thing you’ll see this year but it is something special.

Can't wait to see this. Thanks!

This awesome post I am very excited to read your next blog post..Please keep posting.......
beautiful travelling places

Too cute a movie .A must watch for any & every one .Brings out the Christmas spirit even more . It is very very meaningfull !!