My Magical Place: The Sky Does Fall 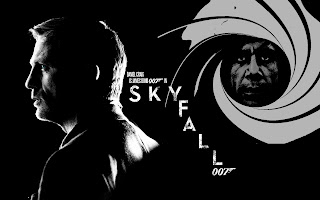 My earlier predictions concerning the falling of the sky turned out to be rather modest because Skyfall is without a doubt the best James Bond movie to date! I've seen less than 10 out of the 23 of them but I say this with the utmost confidence. I know the lore and that's enough on which to form my conclusion. The movie is aware of its 50 year-old heritage and smashes it only to rebuild it and thus reinforce it. Skyfall goes through some pains to emphasise change in the franchise but also goes out of its way to reinforce tradition - it's a fun struggle to watch before it settles on a balance between the two. The re-introduction of Q and Moneypenny is seamless. Both Ben Whishaw and Noamie Harris play their 'modern' updates of the characters very well.

Aside: Whishaw is really doing the rounds and making a name for himself. I also think that Britain is at a place where their seasoned actors are at their peak and the new generation is very talented, which worked well for Skyfall. That tug of war between the old and the new is always at play.

Dame Judi Dench delivers her most hands-on role in her Bond movie career and plays it to near perfection. Bérénice Marlohe may be the official Bond Girl but M is the real Bond Girl in Skyfall, or Bond Mom if you're looking to be more accurate. The relationship between her and Bond runs deep and the manner in which Sam Mendes explores it is heartfelt and genuine. There’s a scene in which she reads from Tennyson’s Ulysses and it wrenches your heart out of your chest.

Javier Bardem as villain, Silva is another of the many highlights of Skyfall. He is a lunatic. He is amusing and very disturbing at the same time. He is not over-the-top like many classical Bond villains though. You get what his agenda is and you can sympathise with him.

Keep an eye on Ralph Fiennes' character, Gareth Mallory. He is quite periphery but makes an impact.

The script is all about the small things and how they lend to the overall picture and the dialogue is as crisp as fresh lettuce.

I could nitpick and point out that the movie does get silly in some places but I choose not to because I'm a terrible critic and because the silliness ads to the 007 tradition.

During the final credits I was texting a friend of mine telling her how the opening theme to Bond movies is usually the most tedious part for me and that it was not the case this time around, even after having heard Adele's Skyfall to death prior to seeing the movie.


So folks if you've not done so go and see Skyfall. Stop whatever it is that you are doing and go to the cinema. Now!
Posted by Charles Siboto at 11:55