Sea Star Summer is the sort of YA novel you pick up and read in one sitting and when you’re done you feel a bit sad that the adventure is over. It feels like coming to the end of a really good December school holiday and having to come to terms with going back to normal life. Sally Partridge’s writing in this book is, for the lack of a better word, delicious. She manages to tackle surprisingly heavy and sensitive issues in a graceful manner that allows the reader to grapple with them without feeling weighed down. Sea Star Summer is a light touch where her last YA novel, Mine was a heavy hammer. The story is told through the eyes of Noami, an awkward, red-haired and bookish 16-year-old girl who goes to Jeffreys Bay for the December holidays with her parents. She’s looking forward to having a chilled holiday reading her books on the beach and avoiding people. Things, of course, don’t go as planned as she not only meets and befriends the carefree and imaginative Elize on the beach but also finds herself being romantically pursued by the handsome surfer, Daniel and Elize’s brooding brother, Marius. From here a whirlwind coming-of-age love story filled with literary references ensues. 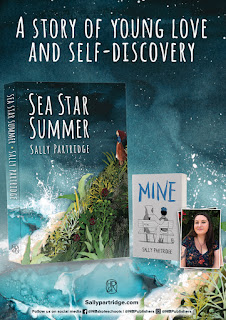 Back home in Cape Town Naomi is the kid at school who never gets invited to parties because the other kids see her bookishness and intelligence as snobby and stuck up. Boys don’t ask her on dates because she’s the sort of girl who corrects them when they’re wrong and would tell them if they confuse the Greek god Poseidon with his Roman counterpart, Neptune. Her mom is always telling her that people don’t like it when you correct them. So when she arrives in Jeffreys Bay and both Daniel and Marius are interested in her she doesn’t know how to deal with the situation, especially when she comes to realise that she actually has feelings for Elize. Daniel is the typical handsome jerk that treats girls poorly and is used to getting away with it and Marius seems to be a nice guy but he is also problematic in his pursuit of a girl who clearly isn’t interested in him. Elize, on the other hand, listens to Naomi and really wants to get to know her.
Naomi reads Jane Eyre to Elize on their beach dates and a quote from that book captures the theme that lies at Sea Star Summer’s heart, women and their perceived place in society.

“Women are supposed to be very calm generally; but women feel just as men feel; they need exercise for their faculties, and a field for their efforts, as much as their brothers do; they suffer from too rigid a restraint, too absolute a stagnation, precisely as men would suffer; and it is narrow-minded in their more privileged fellow-creatures to say that they ought to confine themselves to making puddings and knitting stockings, to playing on the piano and embroidering bags. It is thoughtless to condemn them, or laugh at them, if they seek to do more or learn more than custom has pronounced necessary for their sex.”

Everyone wants Naomi to behave in a certain way in the novel. Her parents want her to be ‘normal’ and to make friends and meet a nice boy. The two boys she meets aren’t actually that nice, though. The relationship she has with Elize is healthy and not as toxic as what she would have with Daniel or even Marius but that’s the one her parents disapprove of. Daniel wants her tone down her intelligence and be impressed with how cool he is and Marius wants to be the saviour type. Only Elize wants her to be just her. Sally Partridge managed to pack in feminism, toxic masculinity and homophobia in Sea Star Summer without it feeling like some sort of lecture on those issues but just the story of a young girl finding herself.
Posted by Charles Siboto at 14:59