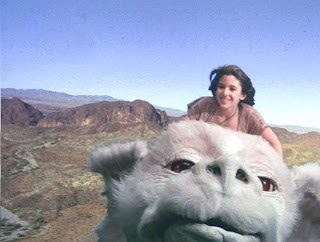 Magical lands like Narnia and Fantasia never fight their own wars without 'recruiting' children from our world to aid them. These magical lands have a sly scheme going on I suspect. Instead of going the expensive route and hiring trained mercenaries they recruit children from our world who have a sense of adventure . Their influence penetrates every nook and cranny of our society, they make sure that books with buzzwords such as brave, epic and honour are continuously being published and are ready for children to pick up and read at all times. The fantasy, horror and science-fiction genres serve as a vehicle to brainwash children. Adults are discouraged from reading "that sort of drivel" and those adults that do read about Faerie and deep space usually turn out to be the sort of people about which the rest of society whispers, "Just humour her won't you dear" - the sort of people who spend too much time on the internets ;)

Our world is a cheap child labour market for our neighbouring magically endowed cousins. They never pay the children they recruit a single penny. What they do instead is enchant them with the beauty of their castles and noble ideals, such as brave kings dying for helpless peasants. Magical countries abuse the fact that one can visit them for decades and it would seem no time at all has passed when you return to our world. After having spent years of your life fighting some strange country's wars they send you home with something trivial, like a vial full of liquidised starlight. I mean really now! It's all just a conspiracy. It simply must be, or my name is Pete - which I assure it is not.

Disclaimer: As far as I know it's not really a conspiracy. It's just one of those things that comes to mind when one has too much free time.
(I would have added this disclaimer even if the CIA didn't show up at my doorstep and force me to).

Thanks for dropping by my blog...
best wishes for your own!

I enjoyed this post. It didn't need that disclaimer...but it made it that much funnier. :)

I'm glad to see that such an avid reader is blogging. Thank you for your kind comment and I hope I'll see more of you here.

Ahh! Mine eyes are open now! But alas! I would still take the trip to a magical country and fight their wars as some wiz kid(I would like to be wizard kid:) if given the chance! Just goes to show you how deep the brainwashing has gone...

This saddens me deeply... the horror of it all ;) I should befriend Dr. Phill, I bet he'd have a solution for all this.