To The Light House (And Back Again) [2nd Revision] 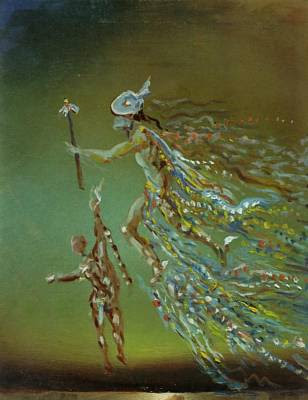 I wrote this story in an English lecture on Virginia Woolf's To the Lighthouse. I wrote the story simply because I got a kick out of it, so don't expect anything epic :)

To the Light House (And Back Again)

Both Rubbish and Irene froze with fear when Hermes’ eyes fell upon them. The god was immediately on his feet and before they could even blink he held each of them by the scruff of the neck and dragged them inside the cave. I don’t know if you have ever been manhandled (or maidenhandled in Irene’s case) by an angry immortal who has just woken up from an alcohol-induced slumber, but I can tell you that it is a very frightening experience. “A pair of thieves, eh?” Hermes roared.
“Please don’t blame Rubbish, sir. The only reason he took your sandals was to rescue me from floating away with my house.”
I mentioned before that Rubbish was an intelligent boy as far as peasant boys are concerned and so before Hermes could reply he said, “Hermes of many shifts, blandly cunning, robber, cattle driver, bringer of dreams, watcher by night, thief at the gates, please do not let loose your wrath upon us for the theft of your sandals because you are a god who condones the practice of thievery after all.”
Hermes burst out in laughter that shook the cave. “Well spoken… very well spoken, dear boy. I do condone theft if the thief does not allow himself to be caught. Since you are caught you will have to perform a certain task for me if you wish for me to spare your lives.”
“Very well then, tell us what to do,” Irene said.
“By the manner of your speech, I take it that you are from the kingdom of Ramsey. I need you to deliver a little gift to a friend of mine, who currently resides in the dungeon of that wet blanket you call a king.”
King Ramsey was the most unpleasant ruler I can care to think of. He was as thin as a reed, possessed a hooked nose and he had the look of someone sucking on lemons on his face. Rubbish and Irene agreed to undertake the very dangerous mission of sneaking into King Ramsey’s dungeon.

The rest of the evening was spent drawing up plans and feasting on honey, cakes and roasted lamb, which Hermes produced from a hidden larder in the cave. Once the two children got past his alcoholism and their fear of him, Hermes proved to be a charming host. He told them of some of the adventurous errands he has undertaken for his father, the mighty Zeus and how on the day of his birth he stole oxen from his brother, Apollo. By midnight Rubbish and Irene were fast asleep with smiles of contentment on plastered onto their faces.

Hermes flew the two children to the kingdom of Ramsey at the crack of dawn the following day. He dropped them off at the city gates and before departing he presented them with a sealed package and the helmet of Aïdes as a gift to help them on their mission.

Sneaking into King Ramsey’s dungeons was no easy business, even with a helmet that renders the wearer invisible – especially since the helmet could only cover one head at a time. Rubbish and Irene managed to sneak into the castle undetected because everyone was too busy to bother with two children. Ramsey did not hesitate to behead those who did not attend to their duties and thus everyone in the castle minded their tasks and naught else. At the passage that leads to the dark and dingy dungeons Rubbish donned Aïdes’ helmet and immediately he became invisible. “Stay here, Irene,” he whispered, “I’ll be back in a flash.”
Irene hid in a dark corner whilst Rubbish trotted down the passage to find the prisoner Hermes had sent them to. It did not take Rubbish long to find the prisoner, she was hard to miss in the midst of all the ruthless looking men who inhabited the cells. The prisoner wore a long, white gown that was in total contrast with the squalor all around her and her light brown skin glowed as if some inner light was struggling to escape through it. Although there was not a trace of hair on her head, no one could mistake her for a man, so striking was her beauty. “Ah, there you are.” She said in a voice that was like the sweet music of Apollo’s lyre. Rubbish looked around to see who she was talking to. The prisoner laughed and said, “I’m talking to you, dear boy. The helm of Aïdes cannot hide you from me. Come closer.”
Rubbish stepped closer to the prisoner and fumbled with his cloak, trying to take out the package Hermes had given him. He finally managed to free the package from his cloak and he handed it over to the prisoner through the cell’s bars.
“Thank you.”
“It’s my pleasure, ma’am.” Rubbish said shyly.
“I suggest that you do not linger too much, but before you go I have a gift for you.” She touched the boy’s head and he felt a tingling sensation all over his body. When she was done she said, “Now no one who sees you shall ever call you Rubbish again. From this day you shall be known as Michael, a name that befits a brave, young man of your stature.”

Michael and Irene made their way home safely through the king’s dingy dungeons and to their merry surprise they found Irene’s house returned to its original spot. It also seemed that the house had acquired some weight along the way. Inside they found a note from Hermes demanding a month’s supply of good wine to be delivered to Mount Sometimes Holy for the favour and the swift return of the helm of Aïdes. In the days that followed Michael thought much about that strange lady in Ramsey’s dungeon and he hoped that all was well with her.

Alas, the story of Michael’s quest to the light house and back again must I end here for now. There were many adventures that followed and many of them included that strange lady Michael encountered in Ramsey’s dungeon. I am told by my sources that her name was Palesa, which means flower in one on the tongues of the South.
Posted by Charles Siboto at 10:49