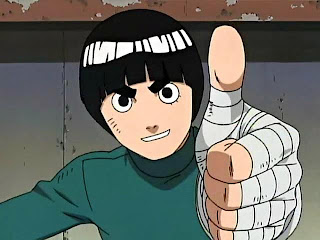 My favourite fictional character of the month is Rock Lee (or Rokku Rï as the Japanese say it) from the animated series Naruto. The boy looks like the biggest chode in the history of the universe but he totally kicks donkey, which he achieves by working his donkey off. The boy’s Ninjutsu skills are sucky but through crazy amounts of hard work he manages to develop kick-donkey Taijutsu skills. He doesn’t come from a “genius” blood-line but through sheer willpower he shows that hard work can kick genius’ donkey. His name is inspired by Rocky and Bruce Lee, two dudes who kicked a whole lot of donkey.

Much respect to the man :)
Posted by Charles Siboto at 18:46