Attack of the Bloodthirsty Couch: Zombies of Doom 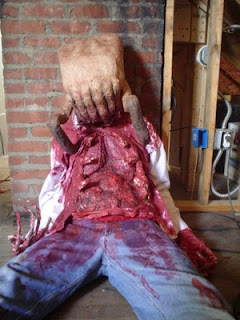 Dear Constant reader of a writer in peril,

Here I am again, still trying to escape the circular ruins with only minimal success. It’s been a few months since the bloodthirsty couch sent its arachnid minions after me and I’ve only just survived wave after wave of their attacks by the enamel of my teeth, until now that is... . Instead of just outright killing me the damned creatures enjoy torturing me and seeing me writhe in pain.

A few nights ago I woke up with a start at the sound something scratching at my window. Now, you should know that I’m a fan of cheesy B-grade horror movies and one thing I’ve learned from them is that you do not head towards danger because you will end up either dead or serving as a host for some alien parasite. Also, I’m the token black guy who gets killed first if he’s stupid enough to go anywhere near the danger. Being the survivor that I am I decided to just stay put and see what happens next. I sat up in my bed for five nerve-wrecking minutes and nothing happened... maybe it was a stray cat or something. Eventually I fell asleep again and pretty much forgot about the incident until the following evening when I woke up to the sound of voices at my window. With my heart beating a tattoo onto my chest I got out of bed as quietly as I could and grabbed the empty bottle of wine next to my bookcase and crawled towards the window. The voices outside turned out to be a couple of lunatics just having a merry ol’ chat on my porch in the middle of the night! I switched on my light and they left. Then I started thinking of the previous night’s incident and wondered whether they are connected. My brain is groggy at the best of times so expecting it to make complex connections at the dead of night was really just me expecting too much from the poor bastard and so eventually I gave up and went back to bed.

The previous paragraph has very little to do with what the rest of this post is going to be about now that I think about it... but it does serve the purpose of letting you know what the state of my mind has been for the last few months.

Some time ago our geyser burst and the guy who came to fix it didn’t put the ceiling cover back on in the bathroom and every time I go to the loo I have to stare into the inky blackness of the space above the ceiling and wonder what my bloodthirsty couch’s arachnid minions are cooking up. I can hear them crawling around in the space above the ceiling in the dead of night and I’m scared for my life. I’ve not been sleeping for almost two weeks now! I sit up at night, drinking copious amounts of coffee, with a screwdriver within reach just in case they try something. I’ve even taken to pushing furniture against my door in an attempt to barricade my room.

The sounds are getting louder every night and this has led me to believe that the spiders in the ceiling are more like the head crabs from the Half-Life games and that they’re dragging people into the ceiling through the opening in the bathroom and turning them into zombies to ensure my doom. I have to invest in a shotgun and a chainsaw before their zombie army is ready for attack.

Pray for me my dearest reader, for I very much doubt that I’ll live thought the coming week.
Posted by Charles Siboto at 13:43