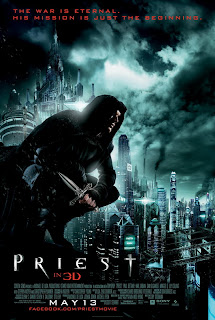 I went to go see Priest with Ms J. on Friday and it was so much better than I expected. Then again my expectations were based purely on the theatrical poster; I’d not seen a trailer or heard anything about it beforehand. I actually thought it was based on the Thief video game series. It’s actually, rather loosely, based on a graphic novel series though. Ms J. said let’s go see it and the Beanbag was game. 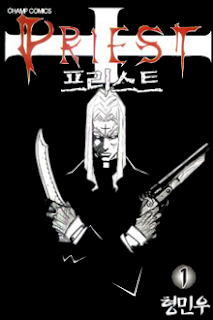 Now, I rarely like movies (or any other entertainment media) that are set in a dystopian or post-apocalyptic future because, to quote my friend, Dave (referring to Fallout 3), “[they] depress me”. Such movies have to be really good for me to put up with and Priest, though it’s not an excellent movie as such, was fun to watch. It has a villain simply referred to as Black Hat in the credits dammit! That’s total badassery. Also, there’s an army of crazy, animalistic vampires (who have no eyes) on a train, hell-bent on the destruction of a totalitarian city run by the Church. The manner in which the Church runs the city is brutal and I’d not like to live there. They do have awesome warrior priests that kick some vampire ass though. You can never go wrong with Holy men and women opening a can righteous ass whupping.

There’s a lot to be said about the big, bad Church... the Big BC as I fondly know it. I’ve always been intrigued by the Church’s rather violent history back in the day (as my tutlings refer to anything that happened more than a decade ago). Rome was badass I tell you! All the ways with which they came up with to kill people would sicken many a serial killer today. On warm summer days I sit on the grass under my favourite tree and wonder what the meeting was like when a handful of respectable Elders of the Church got together and agreed that boiling a guy was the way forward. I can just see them all nodding solemnly in agreement at the suggestion. I’d put my house... wait I don’t have one... I’d put my awesome four-year-old cousin, Lennie, down on a bet that the guy to put that option on the table was one of those Rasputin types that no one seems to know is crazy even though he looks freakin’ crazy!

Maybe I’m just not good at being a Christian but what was up with all that violence!? Am I misreading my Bible? Don’t get me wrong, I’m not saying that Jesus is naught but a sweet, gentle lamb. Lord no! He is also a fierce lion that fights for love’s cause, but why did they have to get all creative about torturing and killing people? I’d go with just hanging them or something simple. Even stoning is a quite excessive for my tastes.

Let me end off by playing devil's advocate and directing you to some of the Church's atrocities throughout history.

P.S. The moral of this story is don't mess with warrior priests or the Church, they will kick your ass... and the boil you alive.
Posted by Charles Siboto at 07:41