Cupboard Person of the Week 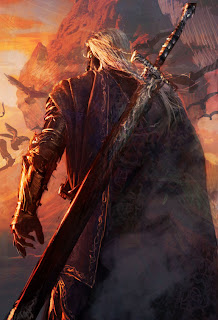 ‘Mane of Chaos. Anomander Rake. Lord of the black-skinned Tiste Andii, who has looked down on a hundred thousand winters, who has tasted the blood of dragons, who leads the last of his kind, seated in the Throne of Sorrow and a kingdom tragic and fey – a kingdom with no land to call its own.’

This one has been a long time in coming.

The man is too cool for words to contain. He jumps out at you from Steven Erikson’s pages and grabs you by the throat as he considers whether or not to slay you with his sword, Dragnipur. This guy is one of the sons of Mother Dark (from whom he broke away), he can veer into a giant black dragon because in the distant past he drank the blood of dragons and just hung out in their realm for a while you know, because that’s how cool people roll. That’s not even his most impressive qualities, a few other people in Erikson’s world of the Malazan can do some of that stuff (one of his brothers for instance); the guy made an awesome sword, named it Vengeance and when he found that the Elder god, Draconus, had a cooler sword, Dragnipur, he romanced the guy’s daughter, teamed up with her to slay her dad, took his sword and the broke up with her. This is a super simplified version of the events that took place but it captures the badassery of Rake. Why is Dragnipur so cool you ask? All who are slain by it are drawn into a realm inside it where they have to join a line of chained souls dragging a giant wagon for eternity!

If you’re this awesome where would you live? In a fortress on a floating mass of rock named Moon’s Spawn of course.

The only thing worth saying about Rake is that every man, woman and child should just shut up and bask in his awesomeness. I want to be like him when I grow up. 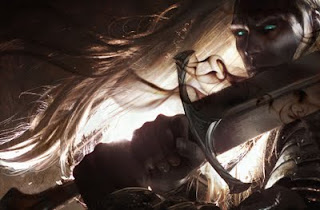 He became my favorite character as soon as he shouwed up in the first book O.o

Anomander just never lets up as a cool guy. I bet he never looks back at explosions as he walks away because cool guys never do that.