The new Tomb Raider has landed and it’s made a big splash in the process. Lara Croft has been rebooted and given a new origins story but it’s always a hit or miss affair when you take a well-known and beloved character like Lara Croft and remake her. Fans are not too forgiving if you get a reboot wrong. The fact that the last Tomb Raider games have been rather lacking in luster adds more pressure to the expectation from a new game in the franchise. In this case it’s good that we’re in a period where fans will give a franchise another chance to reboot if it’s been mucking up a little – it’s a clean slate of sorts really. With Rhianna Pratchett having written the story and created the new Lara Croft’s personality things are already looking up. Developer, Crystal Dynamics also doesn’t go wrong with the game mechanics. 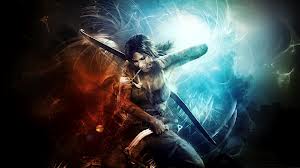 Gone is the plastic, large-breasted Lara Croft of yesteryear and in is an honest attempt at building a human being who evolves from someone young, appropriately attractive (and appropriately dressed), somewhat naive and very vulnerable into a hero. This is what this origins story is, a look at how Lara Croft becomes as tough as adamantium claws – what she has to live through to reach that point. Rhianna Pratchett points out that her Lara is a real woman and this rings true. Throughout the game the player learns what it takes to be a graduate, fresh out of university and to find yourself shipwrecked on an island occupied by cultists who aren’t very welcoming. Lara's journey from wide-eyed graduate to kick-ass survivor is a brutal one that would leave most people traumatised if they were to manage to survive at all. It's also a beautiful experience that speaks to the player about the resilience of the human spirit. 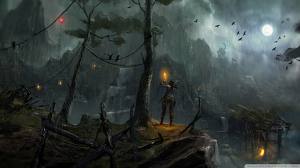 The visuals and game mechanics are powered by a modified Crystal Engine and they are stunning. Lara gets grimier and more bloodied as she makes her way through the breath-yanking island, surviving. The island is alive with vibrant fauna and flora and the weather conditions are wonderfully temperamental. The atmosphere is rich and heavy throughout. The island is a character in itself and exploring it is fun and scary all at once. The dangers are real but once in a while Lara makes it to the top of a ledge and the view is spectacular. Tomb Raider’s resounding theme is survival and Lara has to learn to do whatever it takes to survive and to save her comrades. She hunts and kills deer on the island and defends herself against wolves. This is somewhat reminiscent of Far Cry 3 and the bow she acquires is a low-tech version of Prophet’s bow in Crysis 3. This is actually one of the strong points of the game, the fact that it doesn’t try to recreate the action-adventure genre. It takes elements from Uncharted, Arkham Asylum and other games and blends them seamlessly to tell its unique story. The control scheme is a reiteration of what you’re familiar with and works comfortably well on the Xbox 360 controller whether you're shimmying across a ledge, sneaking up on a bad guy or find yourself in a gunfight. 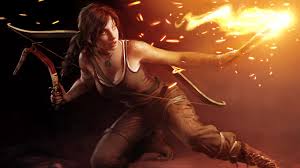 The bow and its arrows is the stand-out weapon because of how versatile it is and purely how satisfying it is to make a kill with it. The grimy and rather violent takedowns prove to be a lot of fun once you get into the swing of things. Tomb Raider is not a celebration of violence just for the sake of violence but rather the player continuously embraces the independence and pride Lara feels at being able to defend her life in a very hostile environment. The bow also makes for great stealth kills and it can be upgraded as you progress through the game for better usage in all out fire fights. Other weapons are also upgradeable as you proceed through the island and salvage wreckage to add onto them. Fire fights get intense and it’s fun to try different ways of approaching enemies and other tough situations.The enemy AI is actually somewhat intelligent. Tomb Raider doesn’t do anything new in this regard but it does what it does well.


The island provides a great deal of exploring options in between shooting the bad guys. Lara Croft is an archaeology boffin and explorer after all and it’s very rewarding to look around, finding all sorts of nooks and crannies filled with cool items and information regarding the history of the island and the cultists occupying it. The island is steeped in history and just walking around it leaves the player with a sense of wonder at what stories broken statues and abandoned bunkers could tell. The very ground and air seem to be a memory of great and terrible things that happened there. Although Lara has to survive and progress through the storyline curiosity always results in some interesting non-linear play as the island begs to be explored in great detail. The island’s history is beautifully crafted and is hauntingly beautiful and ugly. This aspect of the game is what the Tomb Raider series is about and is the best aspect of Lara’s first outing as an archaeologist. 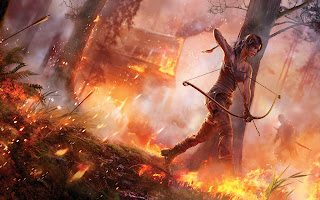 There’s a multiplayer option tagged onto the single-player experience but it doesn’t stand out as much as the main campaign, which proves to be very addictive. The multiplayer option does give you something to do when friends pop over or you’re looking for extra value for your money through some prolonged play. It's the sort of add-on that you wouldn't mind investing a few forgettable hours in purely because after the 12 or so hours it takes you to complete the main campaign you’ll want to stick around a little longer. I think Crystal Dynamics added it as an afterthought and only because people have come to expect some form of a multilayer mode with the release of AAA title.

At its heart Tomb Raider is a human story told particularly well using video gaming as a platform. The game mechanics and controls are solid but what really carries the game are the story (even when it fumbles), great voice acting and amazing setting. The folks at Crystal Dynamics have outdone themselves. I give it heartfelt thumbs up; it’s one of the best games to be released on the Xbox 360 in while.
Posted by Charles Siboto at 16:41