I have a love/fear relationship with the Dead Space franchise. It took me three attempts to get through the first game, which, I guess, is a testament to how good the game is. The first attempt might have failed because I played the game on PC and the controls were horrendous! I was also just plain scared. I digress though, Dead Space 3 is here and Isaac is back with his plasma cutter and his awesome stomp to kill some Necromorphs and other enemy scum! This time the action and terror takes place on the frozen planet, Tau Volantis. The planet is believed to be the Marker home world, which means you can stop the Necromorph threat at its source and thus make the universe a better place for us all. Isaac has relationship issues again and the game's overall story is just as convoluted as his love life. Isaac is summoned from his cool pad on the moon by the powers that be and call themselves EarthGov. Isaac has to save his romantic interest, Ellie and her team. Visceral Games is doing a little too much with the story and it only serves to confuse the player. Fear not though (well fear a little because Dead Space 3 is a scary game) because the clever gameplay makes up for this. At many points you really don't care what everyone around you is on about and just want to kill some Necromorphs and whoever else needs to be disposed of. 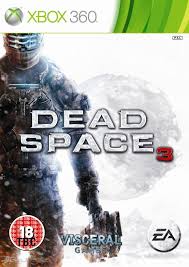 The Dead Space franchise always tries to push boundaries a little and I appreciate how it does it in this iteration. Isaac can face the Necromorph plight alone, which is just fine and a whole lot creepy or you can play the game the way it's meant to be played, with a buddy. The game includes a co-op mode that allows a friend to drop in and help you out as John Carver. This opens up the environment for more exploration options that you would not have in the single player campaign. John Carver can drop out at anytime and you can carry on with your solo play. I am a big fan of this feature because it's nice to be able to share in the story and overall experience of a AAA title. Usually co-op means you're playing some add-on content or that you're playing some puzzle game with a friend. Dead Space 3 allows you to share the actual experience of the story with a friend. This is a huge plus for games becoming more social. In sunny South Africa we still suffer from crappy and expensive Internet service, which can mar the online co-op experience somewhat.

The weapon upgrade system gets a bit of an overhaul and is called the Weapons Bench. The bench allows players to construct new weapons to deadly effect. You can either build your own unique weapons or choose from default options. This is a fun and useful feature for the co-op play as players can come up with weapons that complement one another. This proves to be loads of fun and provides moments of pure glee. Isaac also gains the ability to roll in order to take cover from incoming attacks. It might seem like it’s only a little improvement but in practice it makes all the difference in a tough situation. The enemies, whether they are Necromorphs or human Unitolgist soldiers are smart enough to provide quite a challenge. 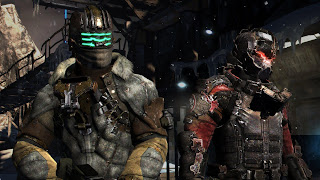 As I'd said earlier, I didn't like the control system of the original on the PC but on the XBox 360 the control system shines and feels natural. Dead Space 3 is at home on this console. But even with the brilliant control system the game has some inherently annoying issues. Many of the environmental puzzles are very frustrating and quite unnecessary. Visceral Games tries too hard to provide varied gameplay and it falls flat at such times. The minimalist interface makes a welcome come-back courtesy of your vitals being displayed on the Resource Integration Gear suit instead of the traditional HUD. You get an assortment of unique suits depending on the edition of the game you buy and you can upgrade them as you go along. The coolest is the N7 suit you get if you have Mass Effect 3 save files. It’s the sort of little touch that gives players a mini geek orgasm of pure delight. 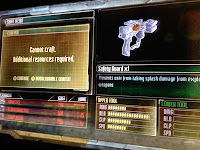 Dead Space has always been about atmosphere: gorgeous, creepy visuals and sounds that constantly have you looking over your shoulder and up at the ceiling. This tradition is continued and the game looks amazing, especially the parts where you get to explore the frozen exterior conditions of Tau Volantis. The game is very creepy if you play the campaign solo and there are moments when I jumped out of my seat because I got scared. It’s really amazing how the Necromorphs never cease to scare the living daylights out of you even when you know when they’re likely to pop out by now. You still rely on Isaac’s stomp to ensure that enemies are dead. The fear factor is alleviated somewhat if you play co-op as you and your buddy will have a good laugh at some of the moments that would have scared you on your own. 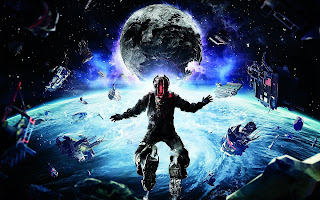 When it's all said and done Dead Space 3 is a good game that just falls short of being great because of a few niggles. The story is somewhat garbled in how it’s told and the game mechanics are iffy at times. The great moments are extraordinary though! The atmosphere is classic Dead Space and serves to creep players out in many exciting ways. The co-op mode is a welcome addition and adds a beautiful social mechanic to the game. Two plasma cutters are definitely better than one. Gamers are tenacious folk though and can look past the game’s flaws to appreciate it for all it tries to accomplish. Our favourite engineer, Isaac Clarke is back for another outing and it's well worth your while. Get your grubby paws on it today.
Posted by Charles Siboto at 16:09