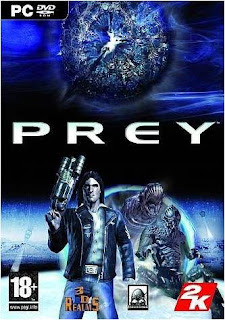 I had just fixed some guy’s PC when I started fiddling around some by installing game demo’s to see how the machine would perform under some strain. I installed the Prey demo and whilst I was playing it I got very nostalgic. I played the whole game some time last year and it was one of those lovely things that appear quite unexpectedly. With the gaming industry moving at such a furious pace Prey is considered old now but it’s still a brilliant way to spend ten hours.

My thoughts on the game are as follows:

Prey kicks off with you being introduced to Tommy, the man whose moccasins you fill throughout the game, in a bathroom mirror. Tommy is a Cherokee Indian who doesn't believe in all that tribal mumbo jumbo his grandfather's always trying to feed him. All he wants to do is take his girlfriend and leave the resort where they live for greener pastures. From the onset you learn that Tommy is not only a motor mechanic, but that he's also a motor mouth who whines about anything and everything. After you bash two troublesome drunks over the head with a wrench the game begins in earnest. Blue lights appear out of the sky and a few chaotic minutes later you find yourself inside the bio-mechanical belly of a gigantic alien vessel armed with a wrench that's still dripping blood and brain matter. What follows is you leading Tommy on an adventure that can only be summed up as surreal and at the best times it's almost epic. Powered by ID's Doom 3 engine the graphics do a stunning job of portraying your bio-mechanical surroundings (walking through the ship's organic openings is quite disturbing). The story is very straightforward: make your way through the ship killing anything in your path, using an arsenal of alien weapons, as you try to save your girlfriend. That you get to save the world in the process doesn't hurt either. Prey's X factor, though, lies in the way in which it brings innovation to the FPS genre. The game is very linear; you walk into a room and clear it of any enemies and/or solve a puzzle. Add portals that transport you all over the ship, gravity switches that turn your world upside-down, and gravity walkways that allow you to walk on the ceiling to the mix and the game doesn't feel linear at all. After Tommy dies (yes, you read right) all that mumbo jumbo spiritual stuff proves to be quite useful in resurrecting our hero, and he comes back with the ability to spirit walk which allows him to leave his body and walk through force fields and solve puzzles. In spirit mode you have access to a spirit bow which allows you to fill your unsuspecting enemies with spirit arrows. The puzzles in the game can become frustrating at times but once you solve a puzzle you slap yourself on the forehead thinking how could I miss that. The best feature in the game is that when you die your spirit is transported to a mini-level where you collect souls until you're transported back into your body at the exact moment you died. Prey is a wonderful game and the little touches in the game make it really special. The game is very system friendly, an entry level gaming PC will get you through just fine.