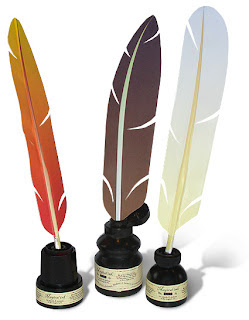 I'm rather worried. The thing is I want to get what I like to call a 'writer's tattoo' and I'm worried about the consequences, how it will turn out and all that jazz. My plan is to go to a tattoo parlour and ask them to design a rockstar flavoured quill for me. I want the tattoo to be placed in between my thumb and index finger on the back of my hand so as to look like I'm holding a quill in my hand. I'm worried that it might turn out wrong and I'll be stuck with a random smudge on my hand or it won't look as cool as I think it will. There's also the little matter of some companies not hiring people with tattoos on visible parts of their bodies (not that I intend to work for some company, mind you). Also, people sometimes have a negative attitude towards tattoos. Some people believe it's defiling your body and that it's unnatural. My mother figures that tattoos are for stupid people who have nothing better to do with their lives. Every time I tell her that I'm getting a tattoo she says that I should go ahead if my aim in life is to be an idiot. She says it in a very patronising tone just to rub it in. A friend of mine told me about some tattoo technology that allows the ink to stay on your body for approximately three months before totally wearing off. I think I should try that before making my decision. Hmm... that last scrap of information sort of makes this whole post rather pointless doesn't it... Ah well, such is the life of a mad man.
Posted by Charles Siboto at 14:35