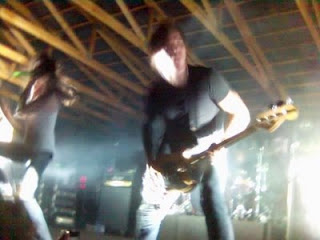 Charlie went to his first rock show and he was totally blown away! We (Sleuth, Dean and I) watched some local bands perform when we got there and I was instantly hooked. I always thought that live music was the suck but when you’re there and your heart is pumping along to the music and there is sweat flying all over the stage you just have to shut up, appreciate and let the music move you. The venue, Bell’s Sundowner, was very intimate so the music was in-your-face live! We almost sacrificed Sleuth to the ancient powers of rock by nearly throwing him into the bonfire they had going there but, as per his usual self, the man was too slippery.

When Underøath came on stage the crowd just went animalistic and you could just feel the awesome vibes oozing from everyone. When they played To Whom It May Concern I knew that this is what I came for. They played quite a number of my favourite tunes like Writing on the Walls, which I sang so loud the girl next to me gave me a perplexed look; they played Desperate Times, Desperate Measures and when they played You’re Ever So Inviting everyone just lost the last of the marbles they had to spare. After we all screamed loud enough to get the band back for two more songs some madman decided to get on the stage and jump into the crowd but he fell on an unsuspecting girl :( The band was nice enough to stop playing and Spencer (the lead singer) asked if people were okay before they carried on again. Spencer (who has a very Captain Jack Sparrow madness to him) kept spitting water into the crowd, which I thought was awesome and I got some on my face :) Only at a rock concert can one get excited about being spat on. We were quite close to the stage and Tim (lead guitar) touched my hand for a nanosecond and that stoked me out like crazy. James (rhythm guitar) is the only chilled dude in Underøath, he was playing pretty close to me and where all the other members were going mad onstage he was just super mellow. Aaron (drums/clean vocals) was quite far back on the stage and I couldn’t hear him all that well but it’s all good. I never had a drop of alcohol but when I left I was drunk on rock.

I really enjoyed the concert and my only regret was that Underøath didn’t play Too Bright To See Too Loud Hear, I can just imagine the crowd clapping and chanting, “Good God! Can You still get us home...?” I would have died and went home, straight to Heaven.

Shout out @ Dean: Goodbuddy, thank you for orchestrating the event. Much respect to you :)
Posted by Charles Siboto at 13:26