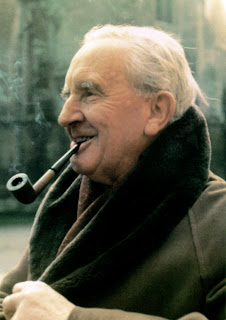 Dreams are a serious business – one rarely knows whether they are real or not, or (more precisely) which of their aspects are real and which are not. Sorting through the tangled webs of our dreams tends to be very sticky and I would rather not do it unless the need is dire, by which I mean something like my Mr Spotty Dog being held hostage by an evil organization of green-eyed cats. Our dreams possess many magical properties, prophecy being the most common and strangest of them I’ve found in my approximately 8030 hours on this planet. I’d be walking down the street when I suddenly have a sense of déjà vu, I’ve seen this before and someone in a bright red hat is about to appear from around that corner I’d think. Such occurrences always fry my noodle until it’s nice and crispy. Enough with all this rambling though, what I really want to tell you is about a very strange dream I had some time ago.

Every single time I read Tolkien I am astounded by the scale, beauty and richness of his imagination, so much so that the ‘real’ world seems rather dull in comparison to his Middle-Earth. He was a cantankerous and endlessly niggling man to know from what I’ve read of him, but I would like to meet him nonetheless. The members of my family are all mad in one way or the other so I’ve some experience with lunatics. Back to this dream of mine: I’ve always had this idea in my head that if could write a story half as good as The Lord of the Rings that I would be the happiest man in the world and then I stumbled across Stephen King’s Dark Tower series and it smacked of Tolkien somehow. The first book in the series opens with the best opening line I’ve ever read. The man in black fled across the desert, and the gunslinger followed. Maybe it’s just me but those words are like the coming of a great storm, and what a whirlwind of an adventure the journey to the Dark Tower has been. The Dark Tower scared me because it seemed to do for contemporary readers what Tolkien did for his readers, what I hoped I could do one day. In an introduction in the new editions of the Dark Tower books King reveals that he was indeed inspired by Tolkien to write a long tale that would captivate readers in the same way that The Lord of the Rings does, but without the Elves. I think that he’s achieved his goal in terms of writing a story that excites readers, a story that even makes them weep at times. His story is so overwhelming that it seeps into all his other stories. All things serve the Beam in the end I guess – it’s ka.

I think there’s still something missing though… King doesn’t quite hit the spot. I’m the only person that I know of who notices this gap, so perhaps it is my job to fill it. Tolkien and Lewis wrote the type of stories that they did because they felt that there were no authors who wrote the type of stories that they wanted to read. I rarely come across books that do to me what Tolkien does. Perhaps if there more stories like Tolkien’s it would be like living in an Angel haunted world, which (as Peter Kreeft points out) might drive us so mad that we would not eat, sleep or procreate. Back to my dream (in earnest this time): I had a dream that as I was walking down Main Street, Tolkien appeared before me in that unsurprising manner in which things happen in dreams – as if meeting dead authors in person was as common as bread. He looked at me and spoke, more to himself than to me it seemed, quoting Sir Philip Sidney (whose work I’ve never seen him quote anywhere before): “Fool,” said my Muse to me, “look in thy heart, and write.”

I said before that I believe in the prophetic power of dreams and I think that the message of this one is fairly straightforward; in order to write something that might do to readers what Tolkien’s work does I have to start writing and to stop dreaming. Whether I’m good or not is yet to be seen. Wish me luck on my journey to the Dark Tower… or is it to Mount Doom? Who knows? I certainly don’t.
Posted by Charles Siboto at 17:50