Pulling a Rabbit Out of My Hat 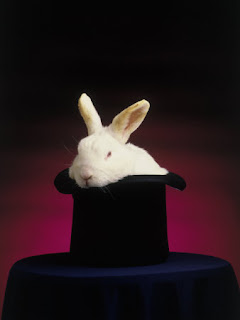 With Nelson Mandela Day having just passed I’ve decided to take advice from Boston Legal’s Denny Crane and pull a rabbit out of my hat in order to wow the jury, by which I mean you, dear Reader of a writer fascinated by the dust bunnies under his bed. My aims for this piece are rather ambitious, given that I don’t want it to be overlong. They are as follows: introducing myself (only in my second post, forgive the rudeness) and my column (Lost in the Cosmos), doing something good for change instead of whining, promoting the awesomeness of fantasy and science fiction while I’m at it and, lastly, having a great time doing it. That ladies and gentlemen is my rabbit, which I will now proceed to pull out of my woolly hat.

My name is Nyameko Charles Siboto and I am a bookworm.

When I tell people this they assume that I just read any book that comes my way and in this they are mistaken. I consider myself well-read but I’m actually not when you take into account how much reading material exists in the multiverse! Then again, no one is well-read under those conditions. I am a fan of mythology, horror, superhero graphic novels, fantasy and science fiction. It is in these genres that I am well-read and that I revel. I’m especially a fan of fantasy as I believe that the genre is steeped in great beauty, especially the works of Professor J.R.R. Tolkien. I study Literature at the University of Johannesburg and I work there as a tutor, a job that I love immensely (don’t tell my colleagues). People say that I’m an agreeable fellow for the most part but I have days during which I am full of nonsense and annoy people by repeatedly poking them. My dream is to own a beautiful house with a magical garden outside and inside it is filled with books, comfortable armchairs, roaring fireplaces and the pantries (many of these) are filled to bursting with scrumptious food. That is to say, I want to live like a hobbit.

Peter Kreeft, one of the beautiful minds of our time in my opinion, said something along the lines of living life like poetry in one of his talks. I’m sure I don’t know what he means but it’s one of those statements that haunt my thoughts and it refuses to be exorcised. I suspect that it has something to do with my fascination with great beauty, whether it is aesthetic (the beauty of a Helen of Troy) or spiritual (the beauty of a Mother Teresa) and I endeavour to make my life beautiful in all that I do.

That is Charles, to some extent, and it is my hope that we may get to know one another better as we explore the stars and a medieval past that never was together in this column. I would like to be the Virgil and Beatrice to your Dante as I lead you on this epic journey.

Take my hand and hold on tight, we are about to find ourselves Lost in the Cosmos.

“If the stars should appear one night in a thousand years,
how would men believe and adore, and persevere for
many generations the remembrance of the city of God!”

This quote says almost everything that I would like to achieve with this column. Lost in the Cosmos wants to show that fantasy and sci-fi are very much like religion and science, their goal is to speculate on the mysteries of the universe and to ask the great questions that have ever haunted human beings from the first time they emerged from their caves and looked upon the tall trees of the great forests, the vast oceans, the majestic sun, the moon and the fiery stars and stood there in fear and trembling, faced with the sense of the numinous. Fantasy and sci-fi show us that the universe, the little portion that we know of it, is howling with holy wildness and that we are part of something substantially bigger than we ordinarily think.

Now, ladies and gentlemen, we come to it; a rabbit being pulled from a woolly hat!

We as South Africans have the bad tendency to whine about everything that goes wrong in this great country of ours instead of going out and doing something good to change the situation. I beg you to go out and to make the remainder of this year a Nelson Mandela one, in honour of the great man and also simply to do something for someone else. To paraphrase Emerson, to leave the world having made one life breathe easier is to have succeeded as a human being. So no matter how small your contribution, it does make a difference. I am going out to Cotlands to play with the children and read to them on my off days to do my little bit for change… and to prostitute fantasy and sci-fi to the younger generation, nerdy whore that I am. :)
Posted by Charles Siboto at 13:31

Hey, why don't you write more often? I also read the previous article and you write well, I guess even better than me. You have a great point in this and the latter one. And you don't whine after all, given that you have lost a little interest on the www - you're rather a doer of good deeds. Welcome back! =)

Thank you, Andy. I shall write till my fingers bleed!