“We think too much and feel too little. More than machinery, we need humanity; more than cleverness, we need kindness and gentleness. Without these qualities, life will be violent and all will be lost.” – Charlie Chaplin

If there is one thing you should learn in this digital day and age (albeit not as digital as science and science fiction speculated in the 20th Century) it’s that social networks will undo you in a matter of seconds if you are not careful. Look at what happened to model, Jessica Leandra Dos Santos on Twitter last year – two racist Tweets out of anger and her modelling career went down in flames. Disconnect looks at how our online activities affect our everyday lives over time.  The film is centred around the idea of how people’s online lives spill over into their ‘real’ lives and how, ironically, being connected via the Internet people have actually become disconnected from each other. 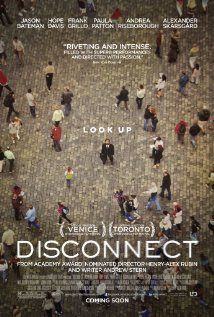 The plot follows the stories of four different sets of characters and contains a number of interconnections between the different story arcs. Disconnect is not the movie I expected from what was revealed in the trailer and I am glad it isn’t. I was expecting a feature with a strong focus on cybercrime in terms of fraud and paedophiles preying on children by means of social media and sinister chatrooms. The latter issue is a very important to address but usually movies deal with it in a manner that freaks viewers out in the same way slasher movies do. Disconnect deals with all these issues in a very human way. The story is simply about people who are drifting further and further apart as a result of being too connected to the communication platforms that the Internet and the technology surrounding it affords. Henry Alex Rubin’s (Girl, Interrupted, 1999) direction is brilliant in terms of how the story is paced and how it develops. Many of the scenes are very quiet and all you can hear is the sound of people typing away on keyboards and when they do talk it’s usually over the phone or via a webcam. All these methods of communication feel very natural to the viewer because that’s how we communicate on a daily basis. Reading a fairly large portion of the movie’s dialogue onscreen as people text each other becomes second nature. The film reaches a dramatic climactic point that you just don’t expect and blows you away for a few seconds – especially after how calm everything has been more or less up to that point. 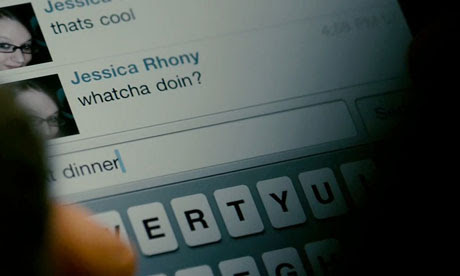 Andrew Stern (Nurses, 2007) wrote a good story that will stay with you for a while after seeing the movie and the ensemble cast delivers some good performances. The initial story is that of Kyle (brilliantly played by Max Thierot), an underage chatroom worker who meets a reporter, Nina Dunham (Andrea Riseborough), in one of his chatroom sessions who wants to help him leave that world behind by sharing his story. The question, though, is does he need her help?  There is the story of teenagers, Jason (Colin Ford) and Frye that deals with the issue of cyberbullying and its outcomes. Ben Boyd (Jonah Bobo) is the victim of the cyberbullying by the two boys and the plot also centers on the fragmented lives that he and his family lead. This arc of the story deals a lot with loneliness as one of its major themes. Jason Bateman (Horrible Bosses, 2011) and Hope Davis (About Schmidt, 2002) play Ben’s parents and Frank Grillo (End of Watch, 2012) plays Jason’s father. The last story is that of a couple, Cindy (Paula Patton) and Derek (Alexander Skarsgård) who have become distant from each other as the result of having lost a child and how they cope with having their credit card details stolen online as a result of them spending so much time on the Internet in an attempt to find refuge from their problems. These stories are all cleverly and subtly interwoven throughout the movie and at times you are given glimpses of how things could have gone in another direction instead of the one the plot follows. Things could go horribly wrong or they can go right.

I enjoyed Disconnect a lot. It’s a very apt story in our digital age and hits home with its message. I highly recommend that you go see it.
Posted by Charles Siboto at 16:32