So Comic-Con 2015 has come and gone and as per usual we were teased with comicy goodness that had us salivating for more and now we have to wait for all that good stuff to come out. But being the industrious geeks we are we will spend the next few months speculating about every little detail in all the trailers we saw.

Here are some of the stuff I thought was cool and look forward to:

Well, Star Wars is obviously going to be the biggest deal for me because that's how my geekiness was born. I have a love/hate relationship with the old movies but I constantly returned to them and I always wanted more of the stories and often read up on all the non-canon lore to get my fix. The Phantom Menace is rather silly but I still watched the nonsense out of it and collected the posters and figurines. Attack of the Clones and Revenge of the Sith were okay for me but the old movies were still the most fun, especially The Empire Strikes Back, I love that movie. Looking at this reel from Comic-Con it looks like The Force Awakens is really a labour of love for everyone working on the film. It also looks like J.J. Abrams and his team are making Star Wars fun again, which is great because that's what Star Wars should be. Nobody cared for Anakin's pained facial expressions, what when we had cool shit like Boba Fett, R2-D2 and Chewie dammit!

Marvel have become so big with their Marvel Cinematic Universe that they don't even need to bother showing up at Comic-Con anymore. This gave DC a great chance to show off some things they have planned and although it was not the best showing (they really should have gone bigger with Marvel not being there to hog all the attention) this trailer for Batman V Superman has me a little excited. Man of Steel was more of a miss than a hit and lots of people don't have much faith in the whole Batfleck situation but this trailer gives me some hope. Zack Snyder is good with the darker and more serious stuff, which is why Man of Steel didn't go down so well but add a Frank Miller, The Dark Knight Returns sort of Batman to the mix and maybe that dark tone can work. I love what Snyder did with Watchmen and the political stuff happening with Super Man in this trailer is very reminiscent of that. Then we also have Gal Gadot as Wonder Woman and we know Snyder is not the greatest with how he represents female characters so that could really go any way. I'm really hoping this one is good though, we deserve a good movie with Superman in it. Do good for us, Mr Snyder and crew.

Then there is Suicide Squad and from what I can see in the trailer I'm sold. I can roll with all this silliness. People seem not to be reacting so well to Jared Leto's Joker but I think it can work. Really, this whole thing looks so ridiculous that I can't wait to see it. I'm also pretty much cool with how the members of the squad turned out. Margot Robbie looks fun and sexy as Harley Quinn. Will Smith makes for a decent Deadshot and we have the wonderful Viola Davis as Amanda Waller. I have always thought that in a world of ridiculous villains Captain Boomerang is still quite silly but it works for him and Jai Courtney looks quite cool as the character. The way Adewale Arkinnuoye-Agbaje's Killer Croc looks reminds me of the character in Brian Azzarello and Lee Bermejo's Joker graphic novel. So, yeah, I'm pretty hyped about this one. 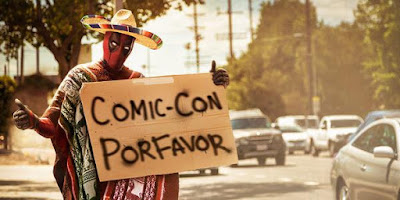 The official trailer may not be released yet but from the leaked versions floating around the interwebs Deadpool was probably the coolest thing at Comic-Con this year. I'll dare say that it was even cooler than Star Wars in some regards. The Merc With a Mouth has always been a fan favourite and it's good to see that it looks like 20th Century Fox will be doing right by him.

Those are my Comic-Con highlights and there were loads of other stuff to see and love that will be all over the interwebs by now. All I can say is cheers to the next few years of geeky goodness :).