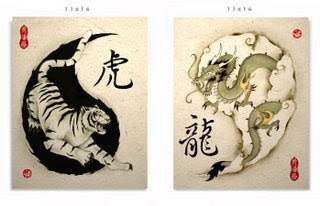 We die and rise the same, and prove
Mysterious by this love. - John Donne, The Canonization

This post is an expansion of an entry I posted on the 14th of February (Valentines Day... hey people pair up on that day! Dualities are everywhere). I've been doing some thinking about soul mates (again) and asking people (mostly girls) what they think of the concept and many of them believe that there's someone out there tailor made for each and everyone. Billions of people go through life without getting into meaningful relationships at all and people are getting divorced all over the show but people are still keeping the faith. I did some thinking and reading about couples who have been going strong for decades and I believe that there are probably lots of people tailor made for each other on earth. A great number of people go through life without experiencing that kind of thing though. If people know about dualities then maybe we can all be a bunch of ridiculously happy people who live on a blue ball. [I]f there is such a thing as true love then it could probably only occur in relations of Duality.
It's amazing how everything seems to come in complementary (or antagonistic) pairs, almost everything is 'lock and key'. Ask any StarCraft player and they will tell you about the supremacy of the keyboard and mouse control system. When God created the earth He made night and day, the sun and the moon, man and woman. In the animal kingdom there is the predator and there is the prey. Obviously this is super general but there's no escaping it, it's like Neo's antagonistic dual, Smith, says "It's inevitable" (this doesn't even fit but I'll just shove it in there somewhere and ruin the whole 'lock and key' vibe I have going on). What do these dualities mean? Is it a case of good and evil and one eventually having to come out victorious or is it a symbol of how things must seek harmony and complement each other. In Christianity one must help one's brother carry his burden and share his load. Is that what humans have to do to live in harmony? Complement your brother's strengths and weaknesses? God (again in the Christian sense) is a tri-unity, the Father, the Son and the Holy Ghost. The Son's will is in perfect accordance with that of the Father and there is a Spirit of love that binds them/emanates from them. Maybe that's what duality is about. Man should hook up with woman and from that union emanates the spirit of love. Man should love his fellow men and bam! the spirit of love flows from that. Maybe it's like John Donne notes in his poem, The Canonization, we find in us (the whole human race and couples) the eagle and the dove, in us there is both strength and weakness but these things in one body of people can make them transcend into a phoenix, something eternal. Could it be that duality then is not the end but the means of transcendence?
Let me know what you guys think, leave a few comments on your thoughts and I'll rope my goodbuddy Dean to come say something about dualities and socionics. Lex Luth will also probably have something worthwhile to add.
Posted by Charles Siboto at 12:06

I don't know if this is actually worthwhile or just restating things in other words but oh well. It always seems that humans are forever looking for the "other" in life. This even goes beyond soulmates and permeates may levels. We are always looking for that elusive piece that completes the puzzle and we explain this longing and partake its quest in many ways. We seek the factor that created the universe to complete the circle of existence. We seek to reconcile our anima+animus/shadow+persona or even subconscious+conscious for some. And ofcourse a lot of us seek our most significant other. To me its part of that universal paradox that Charlie-san speaks of.

But is it necessary to seek the one? It seems so many are dissapointed and go awry in their quests to do so. And after all, we don't die from never finding. And yet the urge always remains for union with that prime other and that other unions don't satisfy. So I guess the question should just be how...how can one "best" go about in finding the one? It is a confounding equation from which many headaches arise. Charlie-san has even pondered the possibility of many possibilities of the one existing for individuals.

But who knows really. Some make in-depth studies into people so they can recognize a potential one. But for others this doesn't work because humans are too unique. For others its shear faith, patience, perseverance or trial and error (or combinations of these things). Some even employ occult methods and various frames of perception.

I've blabbed too much and don't even know if I've responded relevantly. It seems I indulged my sense of contemplative narrative but you asked for it:-)

Well it's good to know that I live in a world where I get what I ask for :) This is like the talk we were having today about people and sexuality. Lots of people never seem to get satisfied sexually but they never stop chasing after "nookie" anyway. Something to think about.