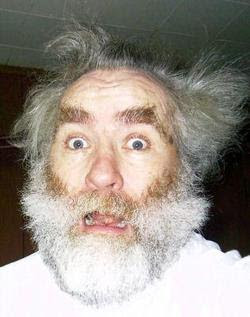 I've been paying attention in my English lectures of late (eccentric lecturers do help) and I came across a queer fellow in my poetry anthology. His name is Mr Lear and I'm pretty sure he's a mad man whose spent half his life in some imaginary country of his own making. Because he's a weird guy I thought it would be nice to give him a mention.

How Pleasant to Know Mr. Lear

How pleasant to know Mr. Lear,
Who has written such volumes of stuff.
Some think him ill-tempered and queer,
But a few find him pleasant enough.

His mind is concrete and fastidious,
His nose is remarkably big;
His visage is more or less hideous,
His beard it resembles a wig.

He has ears, and two eyes, and ten fingers,
(Leastways if you reckon two thumbs);
He used to be one of the singers,
But now he is one of the dumbs.

He sits in a beautiful parlour,
With hundreds of books on the wall;
He drinks a great deal of marsala,
But never gets tipsy at all.

He has many friends, laymen and clerical,
Old Foss is the name of his cat;
His body is perfectly spherical,
He weareth a runcible hat.

When he walks in waterproof white,
The children run after him so!
Calling out, "He's gone out in his night- Gown,
that crazy old Englishman, oh!"

He weeps by the side of the ocean,
He weeps on the top of the hill;
He purchases pancakes and lotion,
And chocolate shrimps from the mill.

He reads, but he does not speak, Spanish,
He cannot abide ginger beer;
Ere the days of his pilgrimage vanish,
How pleasant to know Mr. Lear!